My first publication – a short story called ‘There Was a Time’ – will be released by Affinity as a free ebook on 1st September. Click on the link to read the first scene:

My debut novel, a lesbian romance is due out in October.

Ellie Winters, a successful potter, is living on a remote hilltop farm inherited from her parents. Her well-ordered life is shaken apart when her past meets her present.

Robin Fanshawe, Ellie’s philandering long-term lover, has a fragile truce with Ellie. The arrival of women from Robin’s present threatens to break that tentative pact.

Charming Dr Kathryn Moss, an archaeologist and an old lover of Ellie’s, arrives on the farm searching for a new site to dig. When she discovers a previously unknown Roman settlement and ancient burial site on Ellie’s farm, Ellie allows her to start an archaeological dig of the area.

Will Ellie also allow the rekindling of an old romance or will she stay with Robin? Can that long term relationship, albeit tentative, recover from this collision or will an old romance trump everything she knows?

Will Robin, seeing the interaction between Ellie and Kathryn, leave her womanising ways behind? Will she take a chance on giving herself wholly to the woman she loves?

These questions and the mystery of whose royal resting place is disturbed at Starling Hill are answered in this classic romance of simmering passions, anguished loss, and the wonder of love.

It seemed like a good idea to take a break from writing and embark on a day trip by train to Durham. We chose a good day, a bright sunny day in August. Why Durham? Well, it was partly research for my next book. I wanted to visit the university’s Museum of Archaeology and I had looked it up on their website before setting off.

So, train journeys…all good. Walked into the centre of the city from the train station. Durham’s not very big but it’s called a city because it has a cathedral. For those not familiar with it, Durham is in the North East of the UK, not far from Newcastle. It has a well respected university, the fourth oldest uni in England, and one of the colleges has been housed in the castle for the last 182 years.

View from the bridge over the River Wear.

We walked through a wooded area, up hill and down dale, and eventually found the Museum. This is when I discovered that my research skills are really crap. It was a lovely old building by the river, once a corn mill. However, it was closed. And the artefacts it once housed were now on display in the Palace Green Library, having been moved there only the week before. (In my defence, although the move had been highlighted on one of the site’s pages, I had just read the directions – which still advertised the old mill.) 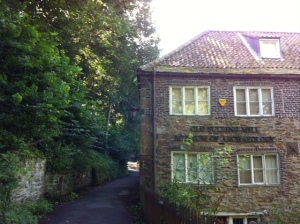 The Old Fulling Mill on the River Wear, situated on the river path below the cathedral.

So, we walked back up the hill we’d just come down and found the new location – a much more publicly accessible site between the castle and the cathedral. I think, though, that I would have liked to see the displays in the old building. The new place was all new and shiny and had little atmosphere.

Anyway it was a good day out. The sun always brings out the best in the Brits. There were buskers in the market square and wonderful displays of flowers everywhere. Durham is a fascinating place to walk around – although be prepared to hike up and down hills – with lots of little alleyways. I even managed to find the People’s Bookshop up a narrow wooden staircase. 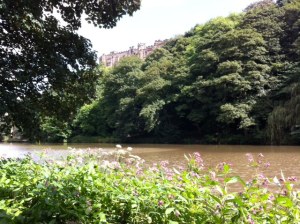 The top of the castle just visible from the other side of the river.

My partner was very patient with my ramblings with the promise of a glass or two of chilled dry white wine keeping her going. We enjoyed a tasty lunch at the Cafe Rouge by the river and sat in the sunshine in the market square listening to the music and watching the crowds until it was time to catch the train home. 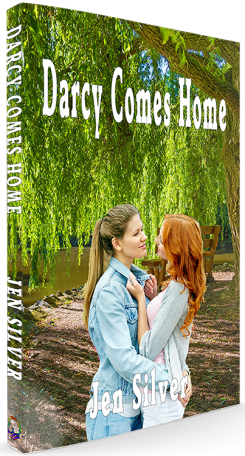 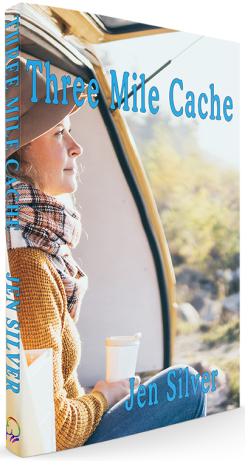 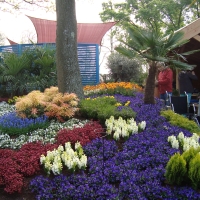 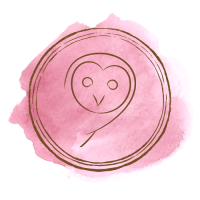