I’ve never been to Nottingham. Which is a bit odd considering my obsession with Robin Hood in my early years and now in my later years, shooting longbow at our local archery club.

When I was about seven or eight, I made my own bow and played in the woods. I always wanted to be Robin, not Maid Marian. We’d moved to house next to a wooded area, which seemed large to me but probably wasn’t very big.

My mother signed me up for Brownies. I think I only went twice. I wasn’t impressed with the range of activities on offer…none of which involved shooting arrows. And I didn’t want to sit in a village hall with the other girls around a fake fire being a pixie or a kelpie.

One day I came out of the woods just as the Brownie troop was marching down the road. Brown Owl brought them to a halt and kindly asked if I would like to join them on their nature hike. I’ve no idea what I said, if anything. But I disappeared quickly back into the woods and let them march on to study flowers and butterflies while I went returned to fighting off imaginary foes…Guy of Gisborne and the Sheriff of Nottingham.

Dressed for playing in the woods

We moved to Canada not long after that and my first girl crush was over a young woman at the summer camp who taught archery. On my tenth birthday I was given a fibreglass bow with a set of arrows and paper target. It stayed with me until I moved back to England over twenty years later. I gave it to two little boys before leaving…they were absolutely thrilled. (I’m not sure their mother was.)

And then there was a hiatus of many years…working, meeting my wife, getting a university degree, and taking up golf. It was actually another golfer who reignited my interest in archery. She told me about the local club and I took their beginners’ course. That was nine years ago and I still love it.

Dressed for an Agincourt shoot

So, this weekend, I will finally be visiting Robin Hood’s heartland. On Friday I’m taking part in the 1st Annual Waterstones  LGBTQ Literature Festival in Nottingham where I will be reading from Deuce. (If you haven’t come across my most recently published novel, take a look at this review from Gaby at Lesreviewbooks) 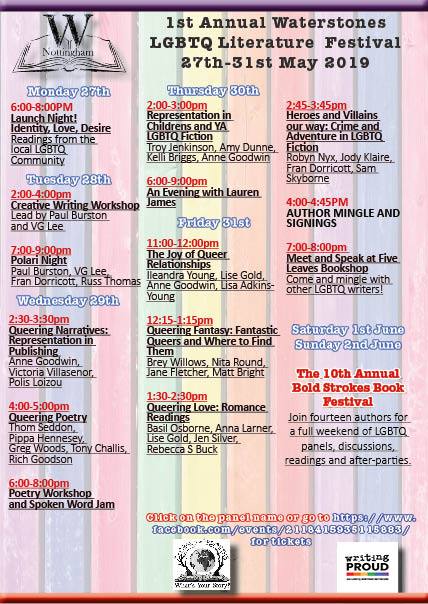 And then on the weekend I’m looking forward to meeting up with authors, reviewers, and readers at the 10th Bold Strokes Book Festival, also held at Waterstones.

If you can make it, please come along and join in the festivities.

The team at Affinity eBooks, beta readers and editors, try very hard to weed out any obscure British-isms in my books. They are mostly successful. I get the manuscripts back during the editing process with polite comments in the margin: “Perhaps you could find another way to say this”.

I thought they did a very thorough job with my fourth published novel, The Circle Dance, but then I received an email from my American friends saying there were two phrases they didn’t understand.

The first one is, I think, a particularly Yorkshire phrase (although if anyone can put me right on the origin, I would be grateful). Taylor, the teenage girl in the story is complaining about her brother saying “and then he goes and dobs me in.”

I thought it was fairly obvious from the context that her brother had snitched on her, telling tales. But clearly this was not a phrase these readers had come across.

The second one they picked up on was from the scene were Phoebe is lost on the moor and bemoaning her lack of outdoor skills. She reflects on the fact she didn’t last more than two sessions in the Brownies “without wanting to nut Brown Owl”.

This was a bit of personal history creeping in. I quit the Brownies after two sessions, as I didn’t want to spend precious Saturday mornings sitting around a plastic fire in a draughty village hall pretending to be a kelpie. For a start, I had no idea what a kelpie was. It just sounded a bit lame, even to a seven year old who liked reading fairy stories. If I’d been told they were mythical water horses, I might have been persuaded to stay.

A few weeks after I left the Brownies, I wandered out of the woods near our house armed with my homemade bow and arrows and was dismayed to see the Brownie troop marching down the road towards me. They were on a nature hike. Brown Owl stopped to ask if I would like to join them. I’m sure she was a lovely, caring woman. I just shook my head and disappeared back into the woods to carry on playing my favourite game, emulating my hero, Robin Hood.

Anyway, back to the ‘nut’ expression: to nut is equivalent to a head-butt. At the age of seven, I wouldn’t have been tall enough to ‘nut’ Brown Owl unless she was kneeling down. And I don’t think it would have occurred to me to try it. My character, Phoebe, has a more aggressive personality.

A head-butt is also known in the UK as a “Glasgow kiss”. This would be my wife’s preferred method of attack. She’s from Glasgow originally and I think it’s ingrained in Scots from birth.

I did Taekwondo for a number of years and loved doing the patterns but never could quite master the aggression needed to win a fight. I took part in one and came second. My wife, however, would have no problem. When I stopped doing Taekwondo, I tried Tai Chi. After I’d attended a few sessions, my wife said she’d like to come along to see if she would like it. I had told it was good exercise as well as being a martial art.

Because she was a newcomer to the class, the instructor took her to one side to show her the basic moves while the rest of us carried on with performing the pattern we were learning. He told her to grab him by the throat so he could demonstrate how to escape. She grabbed him and he had no chance. She wasn’t letting go.

After the session, she decided Tai Chi wasn’t for her. I’m sure the instructor was relieved.

Clearly, a posed photo – but I think it looks like I mean it!

If anyone has come across other British-isms that may need interpretation, please let me know.

In other news – I’m pleased to say that the paperback version of Christmas at Winterbourne is available on Amazon. Links: Amazon UK / Amazon US

Where women are the heroes of their own lives and love is the universal story. Author Karin Kallmaker's official portfolio of published works, blog, and author store.