Checking the programme for ‘Alibis in the Archive’

I spent last weekend listening to authors and publishers extolling the virtues of a life of crime at an event held at Gladstone’s Library in Flintshire, along with eighty other interested people. In mainstream fiction, crime pays. We were told that it is the best selling genre. We even had a presentation on the various ways and means to poison someone. Luckily nowadays you are less likely to get away with it than you were in the nineteenth century when forensic science was an emerging discipline.

The speaker’s platform in the library

I was particularly encouraged though to hear two successful writers admit that they don’t plot their novels ahead of time. These were Ann Cleeves, author of the Vera and Shetland detective novels, and Stella Duffy OBE who has crossed several genres with her books—notably crime and historical.

They were also impassioned presenters, speaking for forty minutes without notes, sharing anecdotes and insights into their thought processes with the audience.

Some members of the audience were astounded to discover that you can write a good crime story without knowing the ending at the start. Ann Cleeves said that when she started writing the first Vera book, The Crow Trap, she didn’t even have the character in mind. She was three chapters into writing the story when someone opened a door and there was Vera.

Stella Duffy is currently working on finishing a Ngaio Marsh novel, Money in the Morgue. Marsh left three and a half chapters and some notes—however with nothing to indicate whodunit or even the names of a lot of the characters. This sounds a rather daunting task but having seen Stella speak, I am sure she is up to the challenge.

I can’t compare myself to either of the above-mentioned authors, but this is very much how my stories develop. Sometimes the direction a story takes comes as a complete surprise.

For example, when I started writing the second book in the Starling Hill Trilogy, Arc Over Time, this scene in Chapter Two came out of nowhere and put a whole different spin on how Jasmine Pepper’s character was going to develop.

Just walking up the road to Max’s house was a thrill. This was a part of London she could only dream about living in. Her parents had helped her pay the deposit on her small garden flat in Stoke Newington and she was still paying off the mortgage ten years later.

She stopped outside the large white Georgian house, the engorged purple flowers of the climbing wisteria vine hanging lusciously over the front door. Taking a deep breath, Jas lifted the brass knocker but the door opened before it fell back in place.

“Ms. Pepper. Please come in.” The speaker was dressed in a maid’s outfit, although a more risqué version than any worn by those employed at nearby royal palaces. When the maid turned to lead her down the hall, Jas got a view of the young woman’s bare cheeks. She swallowed nervously. What was she letting herself in for?

Max was leaning against the fireplace in the large sitting room where the scantily-clad maid had taken her. The sight of her hostess looking imposingly handsome dressed in a close-fitting tuxedo dispelled her misgivings. Whatever this evening was leading to, it was likely to be more fun than a lonely night in front of the telly watching repeats of Rizzoli & Isles.

Interesting what happens when a door opens.

It was a thoroughly enjoyable weekend and I can recommend a visit to Gladstone’s Library. I will certainly be keeping an eye on their yearly programme of events as a return visit is definitely on the cards sometime in the not too distant future.

Christmas at Winterbourne is in print…available on Amazon: Amazon UK / Amazon US 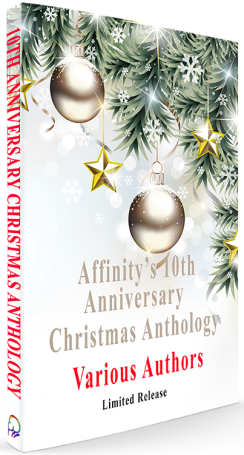 Where women are the heroes of their own lives and love is the universal story. Author Karin Kallmaker's official portfolio of published works, blog, and author store.